November 21, 2009
For the past several months we've been working on a project that is going to completely transform Christina Lauder Portraits. Previously we've been working from our home. We have a dining room which is big enough to convert to decent studio space whenever we have sessions booked in. But it has always meant moving furniture and making sure the entire house was clean every time we had a client come around. And it makes it very difficult to do laundry when I can't hang it out to dry by the dining room radiator.

Well these are problems of the past for us now. In less than a week we should have our new studio up and running (I hope I've not just jinxed it by putting this revelation in print). This has been a dream of mine for as long as I can remember. 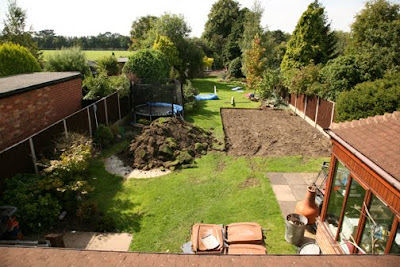 This was our backgarden at the start of the build. It seems like such a long time ago. At that point it felt like we would never finish. This photo was taken on September 11th. But it wasn't until October 8th that the first wall panel was erected. 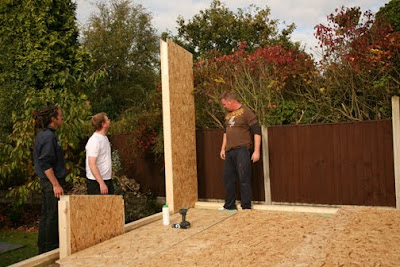 This was a very exciting day for me as it was the day it all started to take shape. A

nd amazingly all wall panels were erected on the same day. In fact this stage only took 5 hours which was a shock to us all. 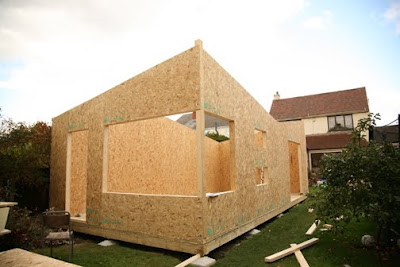 Unfortunately it wasn't the walls that were the difficult part though. It was the roof, with panels that were twice as thick (therefore twice as heavy) which needed to be lifted over ten feet high and not at all in a standard roof like formation. 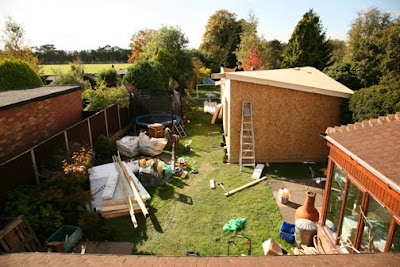 Unlike the walls, which went up relatively easily, the roof took much longer than 5 hours. Although still not bad at about 12 hours. 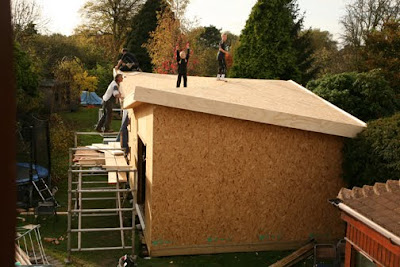 And yes, that is our kids playing on the roof. It took Kieran several trips part way up the ladder before finally mustering up the courage to get on the roof. I suspect that was only because his little sister managed to make it up. 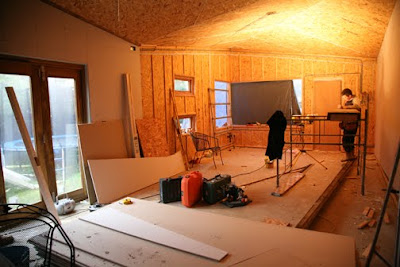 This is a photo of the inside a couple of weeks ago. Andy, my husband, wanted photographic evidence of his handy work. He did the battening before the more trained came in to fix the plasterboards. Amazingly he got most of it right. Only a few battens needed moving. 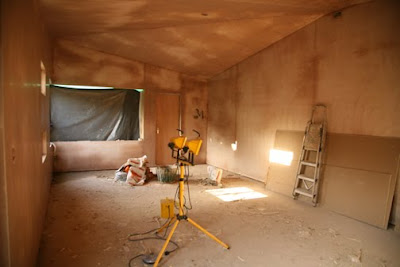 And finally the plastering could be done. This was the part I was looking forward to most because it meant just a matter of days before we could paint. 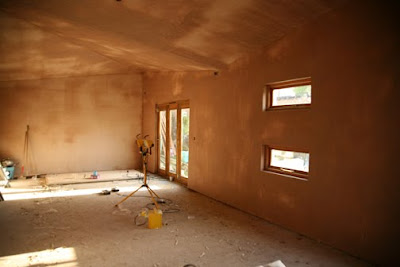 And yesterday we began the painting. Well actually I should be more specific as Andy began the painting. I just helped him in the evening and all day today. The painting of the white walls is now complete and tomorrow we start on the charcoal wall. I'll take photographs of that tomorrow though.
So its really not long now. In fact, it can't be as we have our first session booked in for Thursday afternoon. Which only leaves us 4 and a half days to get it all done. Well to get the inside done anyway. The outside still needs a lot of work and that isn't going to happen for Thursday. But I'll keep you posted of the progress.
Finally my dream is about to come true. I can't wait.

Our Studio
Labels: Our Studio

Anonymous said…
This comment has been removed by a blog administrator.
26 November 2009 at 06:42

Unknown said…
Your studio looks GREAT! Who did you get to do it for you?

Did you design it yourself?

April 02, 2019
Well I know there is still a lot not to love but I'm choosing to see the great things about London at the moment. I am having a ball this year visiting London as often as I can. Which is unusual for me since I usually prefer the comfort of my own home, in rural old Leicestershire. Staying home and avoiding people has always been the easy option. But this year, possibly due to the wonderful weather we keep having, has me longing for venturing out. Again, just like my last trip, I headed out with my good friend Panikos Hajistilly . Living in North London he finds it easy to meet up for our shoots. This time though I had more of an idea of the sights I wanted to use as the backdrops for my portraits. With it being spring I was in search of colour, preferably flowers. Admittedly. I didn't quite get what I was looking for. The white fronted terraced houses with pink magnolia trees we did not find unfortunately. But I did make it to Peggy Porchen's which was a must see on m
1 comment
Read more