Lands End to John O'Groats with our Friends, the Hall McNairs ~ Part III

August 25, 2008
Now this is the final entry regarding this trip. I think I have taken up enough space on something that really isn't even that closely related to my photography business, even though it does contain a lot of photographs.

So, where were we? Oh yes, the good weather had ended. It was Saturday August 9th and the 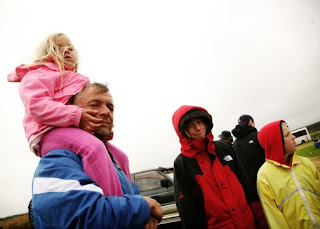 Highland Games in Mey were due to start that afternoon. We managed to get the tent and everything packed away in the dry but it didn't take long for the rain to start. By the time we arrived at the Highland Games it was typical, horrid, Scottish weather. And of course, I forgot to pack proper rain gear for us all. But we weren't going to let that stop us, particularly since this was the closest we were ever going to get to royalty.

I must admit that I knew very little about the Highland Games. I certainly didn't know that the public could enter on the day. Having seen that very few people were entered anyway my step son decided he'd like to enter. My husband and I are so glad he did. He can now say that he has competed in the Highland Games. And not just any Highland Games either. It is the one that Prince Charles attends each year for the judging of the tug of war. 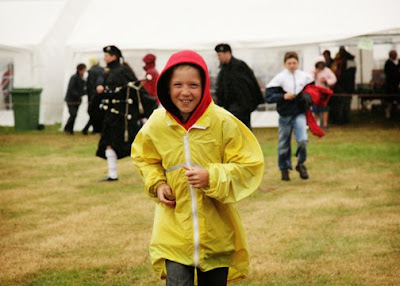 As it turned out that he came in 3rd and won £3 in the boys 100m. Although, there were only 6 of them running so not necessarily the greatest accomplishment in his life but one he will be able to tell people about it for many years to come.

Only minutes after Kieran crossed the finish line Prince Charles and his entourage entered the field. None of us were expecting him to be in the first car and we certainly weren't expecting him to be driving. As such, I was unprepared, in part due to our good friend Niki suggesting that they would be 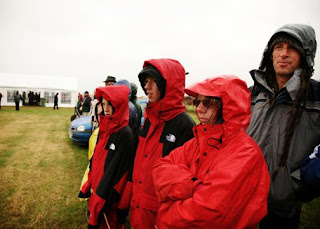 coming in behind us rather than in front. Hence the reason I have a shot of the car driving away from us rather than towards us. I will be kicking myself for some years to come having missed the shot of Prince Charles waving at us as he drove past. 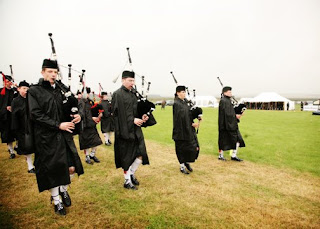 To give an idea of the size of the event, the Royal enclosure was directly across the field in the white marque here in the distance. Even with the limited numbers, the press quoting somewhere in the region of 300 in attendance, it still didn't stop the abundance of press from turning up with their huge and extremely expensive lenses. And I thought I had a big lense. Some of their lenses looked more like telescopes. And there I was with my 105mm lense. I contemplated pulling out the larger lense (a 200mm) but it was buried beneath a sea of camping gear and still would have pailed in comparison to their 800mm's. Had the weather been better I am sure I would have made more of an effort though. 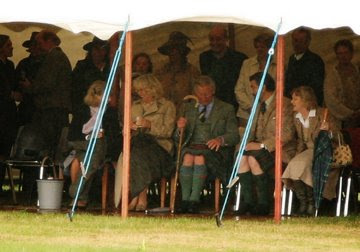 So in the end all I could get of Prince Charles and Camilla was what you see above. But it will have to do.
Following the Highland games we headed towards home, with the intention of staying a night near Perth to break up the journey. Getting a campsite without pre-booking was harder than we anticipated. In the end we found a place that could squeeze us in. But the trouble wasn

't over there. It wasn't until after our night out at an Indian that we realised just what we had gotten ourself into. We left the restaurant in the pouring rain and total darkness, with airbeds still to blow up and sleeping bags to take out. That wasn't the problem though. It wasn't until I got into bed that we discovered our tent was flooded. My daughter pointed this out to everyone as she splashed in a puddle inside the tent. Morning couldn't come soon enough. And it wasn't until the then when we took down the tent that we realised just how our tent became flooded. We were sleeping on a small lake. 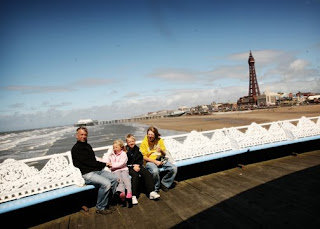 To finish our trip off we decided to head to Blackpool. No one, apart from Andy, had ever been there so I thought it would be something worth seeing. Having now been there, I am so glad we made the stop so that I don't have to make a special trip in future to see this place I had always been curious about. I had heard many things about Blackpool and unfortunately it was all true. 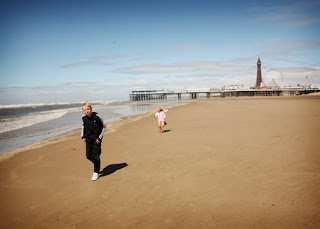 What was most amazing of all though was the blue skies we had from about 10 miles away until we left the place. Prior to that we had nothing but terrible rain. We almost drove straight home thinking we would just be wasting our time anyway. 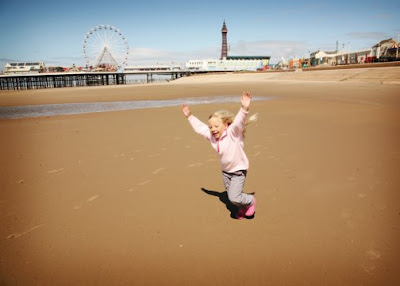 In all it was a fantastic trip. We are all very glad we made the effort and it will always be something we look back on quite fondly.

Thank you Niki and Rob for letting us be apart of your adventure.