Lands End to John O'Groats with our Friends, the Hall McNairs ~ Part II 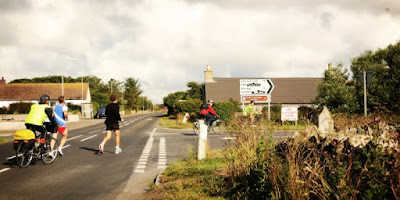 As I said earlier, we were lucky enough to accompany our friends, th

e Hall-McNairs at two points during their journey. The first was from Tewksbury to nearly Nantwich which I wrote about in an early blog entry. And the second point was from Wick to John O'Groats. 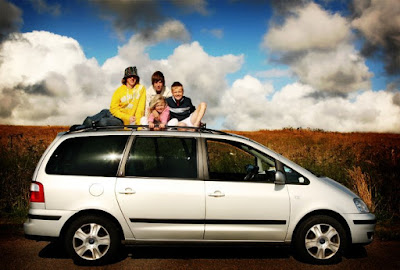 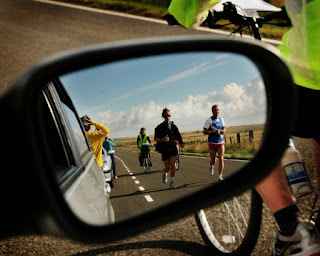 It was never our intention to be there for the finish, although if my husband could have had his way he would have joined them for their entire journey. Luckily for me it wasn't possible due to other commitments (like paying the mortgage). Not that I didn't want to be there with the Hall-McNairs. Its just that the weekend from Tewksbury to Nantwich was enough for me to see just how much work was actually involved. The 18 days from Land's End to John O'Groats was no holiday. 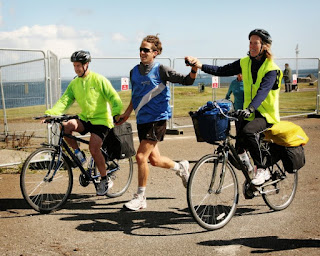 Andy though, was determined to see the finish. We had discussed it on several occasions but it just didn't seem to make sense. There was too much on for us both and the drive to John O'Groats seemed too long, particularly with kids. But as he kept harping on about it in the end I caved and agreed to make the drive through the night in order for us to be there for the morning of their last leg of the journey. This was clearly something important for Andy. Besides, he said he'd owe me big time for this. I just better make sure I cash in on it before he forgets.

Well we made it in time for Andy to accompany the crew for the last leg of the journey and I took the kids to the finish, although we almost missed it as we sat drinking coffee and eating cake. Luckily someone spotted them from across the car park and ran to tell us so we could get into position. We really only had seconds to spare. In hindsight the coffee could have waited but it is hard to gauge how long it will take to run 17 miles. We're just lucky the finish line was right next to the coffee shop. 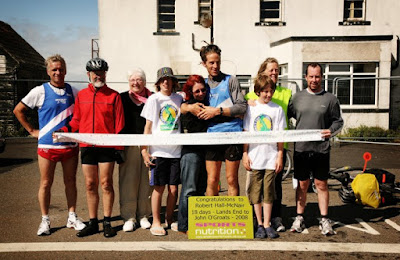 It was great to be there for the finish. What an accomplishment it must have felt for all those involved from the start. Niki and her parents did a fantastic job taking care of everyone. The boys, Atticus and Reuben did incredibly well to last the journey with minimal complaints. And of course Rob, Sue and Martin did amazingly well to complete it in 18 days without a days break. I was exhausted just from driving it. I couldn't imagine doing even a quarter of what they did. Congratulations to them all.

Well we really lucked out with the weather. It was blue sky and sunshine for the first 2 days of our trip. It could have been a bit warmer so that the kids could really have enjoyed the seaside but with the weather we've been having lately I really can't complain.


We enjoyed a lovely day at the beach at Dunnet's Bay. The kids were in and out of the water all day, while Andy and I sat cosy and warm watching from a far in peace and quiet. 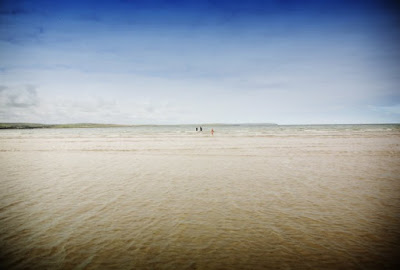 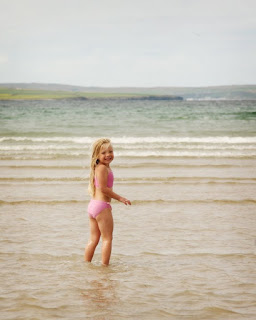 My daughter, Mackenzie, absolutely loves the beach. Its all she has wanted to do all summer. So we finally gave her a day at the beach. She was in heaven. And she didn't care one bit about how cold the water was. Andy and I found it too cold for our feet yet she was lying in it and thinking it was great.

While up north not only did I get a nice break away from home but I also managed to meet up with a fellow photographer, John Baikie, who was kind enough to drive over from Thurso to meet us at the Seaview Hotel in John O'Groats. It was great catching up and hearing what he has been up to and about some of his plans for the future. Its always nice talking to a fellow photographer and being able to talk shop. Working on my own means I don't often get the chance to speak to people about the business of photography so it was great to get that opportunity face to face rather than just on a forum as usual. I really enjoyed it. And while I was meeting John, Andy arranged to meet with one of his ex-colleagues, Kate who also lives in Thurso. It was a little strange being so far from home yet still meeting up with people we know.

Well this concludes the good weather portion of our trip. I think I will post this as it stands and add one final entry for the remainder of our trip as it includes getting a photograph of Prince Charles. Who would have expected that way up there?