August 10, 2013
This week I had the pleasure of working with Lainy from Heirloom Bears and I had a fantastic time.  As I've said so many times before, one of the best aspects of my job is that I have variety in what I do.  Rarely are two days the same.  And this experience was truly unique and just the sort of thing to de-stress me and ignite the passion for my work again.  It was just so different to what I am used to doing these days. 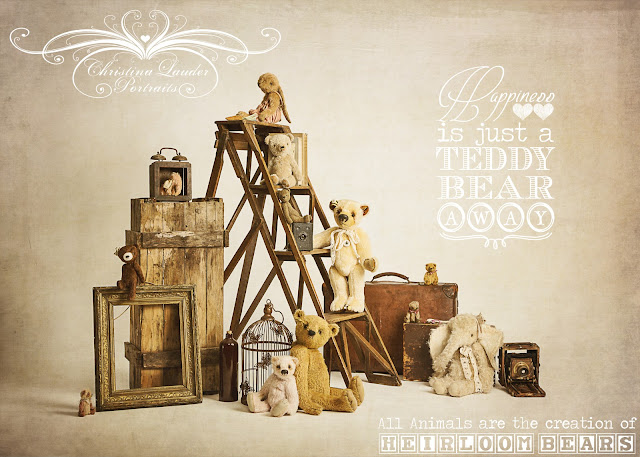 I knew in my head how I wanted to represent these bears for Heirloom bears however I didn't have enough bits and pieces to complete the look.  Lainy on the other hand had a number of antiquey pieces that she could contribute to the project.  So as a last minute decision I asked if she'd like to join me in creating the images.  Normally I prefer to work on my own but in this case having her on hand made the job much easier as she could make sure I got the animals just right for her.  As they are her creations it would require her eye to determine whether or not their character was truly coming out.  And it was so much easier to have someone to bounce ideas back and forth with. 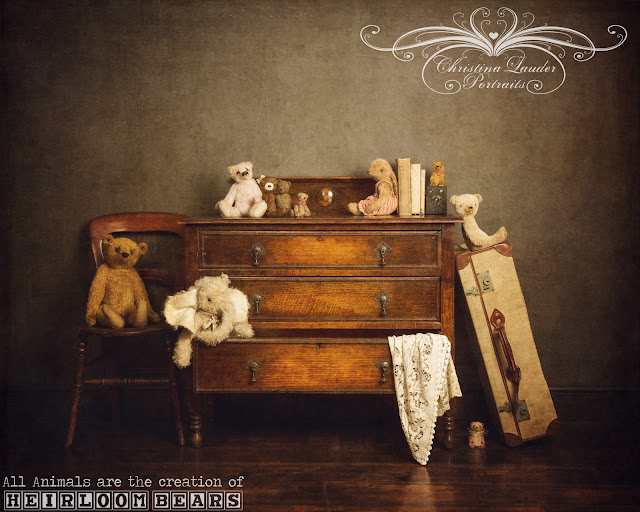 One thing that surprised me with the bears, apart from how long they take to make (typically 3 days each by the way which is why they cost what they do), is that the limbs and head are all moveable features, having been stitched separately with each limb containing its own joints.  This means they can stand and sit quite easily, which made it much easier to position them for these photographs. 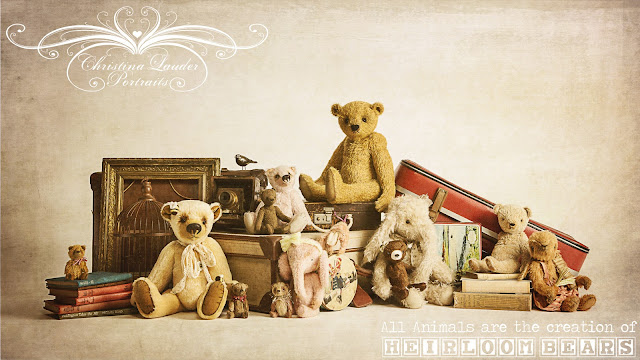 I love each of these animals and I'm thinking of getting one for myself.  I just can't decide yet which animal I'd prefer.  I'm partial to elephants but quite like the idea of a traditional bear which could be a frequent addition to many of my baby and children's portraits.  But then the face of that bunny just looks so sweet.

To give people an idea of just how long something like this takes to produce, together we spent 3 hours on this shoot to set up 3 different images (the one of the bears on their own was just a subset of one of the main images so it doesn't count).  Each image was well thought out and analysed to produce a composition that worked.  We tweaked and re-tweaked the bears repeatedly, often relocating a bear or changing its head direction to suit.  Then following the shoot the processing of these images took a further several hours bringing the total time spent to nearly 8 hours.  I think some people are of the belief that taking a picture involves pressing a shutter and instantly the magic occurs.  In this case it took close to a full day to produce 3 images. This is what you should expect if creativity and perfection are what is required. 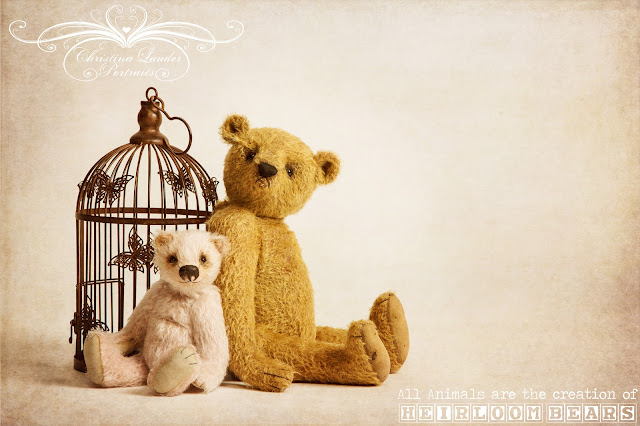 I thoroughly loved producing these images and feel it was a rather successful exercise.  If you have any such requirements please get in touch and we can discuss.  Again my number is 01455 611069.